visitors since the start of time 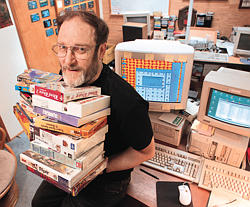 The Eastside Journal did a story on me (below) which oncluded the picture above.

Master of the game

Video game pioneer got frogs hopping years before the PC

BELLEVUE -- Before Diddy Kong Racing. Before Tetris. Even before Pong, there was Frogmaster and its inventor, Michael Crick.

If anyone has more history in computer games, Crick hasn't met him.

"I think I have been around computer games longer than anybody,'' said Crick, who used a wooden computer in 1966 to create a game where frogs play football.

The son of a Nobel Prize winner, Crick was among the first in the door when the video game business exploded in the early 1980s.

"Michael is our veteran,'' said Alexey Pajitnov, inventor of Tetris. "Anytime that I am working on a new game and it has the word puzzle in it, then Michael is the first person who comes to mind.''

Today, Crick runs a small game company from his Eastside home, splitting his time between designing new games and working for other software companies.

"We've been talking to the kids about what they should do with their lives,'' he said. You "do what you're motivated to do.

"I always thought it would be neat to create computer games. I didn't think about it terribly much.''

Although there are no precise records, Frogmaster could very well be one of the first computer games. The mid-'60s were "very early'' for people to even be thinking about video games, said David Sheff, who wrote a book on the history of Nintendo.

"If (Crick) was working on games at that time, then he, along with Bushnell of Atari, could be viewed as the fathers of this industry,'' Sheff said.

Crick always liked puzzles. So the idea of creating a computer puzzle game intrigued him. Late one night at his company's PDP-1 computer -- a 64K machine that filled a small room -- he started writing code for Frogmaster.

"I was doing it just for fun,'' Crick said. He had no idea that he was at the forefront of a multi-billion-dollar industry.

"The idea that you could sell a computer game was beyond anyone's comprehension at that time,'' said Crick, whose beard is graying, although he wants his age kept secret.

Frogmaster was later developed for Atari, launching a career that spans the history of video games.

Crick's resume of those he's designed for reads like a Who's Who: Nintendo, Microsoft, Sierra-On-Line, HES Games, Taito Co.

In a field dominated by 20- and 30-year-old whiz kids who grew up on Game Boys and Atari 2600s, Crick is truly a journeyman in the industry.

"It is not proper that someone my age should be designing games,'' said Crick, with his soft English accent. "I think of myself as kind of an anachronism.''

His ranch-style home in northeast Bellevue definitely shows the wear and tear of three decades in the business.

Crick's mind is like his home: a visual world cluttered with theories, models, ideas.

"In designing a game, you always have way too many ideas,'' Crick said. "There is always a winnowing process where you have to cut out the things that are not essential to keep the game elegant and simple without losing its essence.''

It's a thought pattern that friends and family members quickly recognize. Barbara Crick says her husband solves mental puzzles like Rubick's cube with ease. And his trademark attorney, Rex Stratton, says Crick is usually racing four paragraphs ahead of each sentence.

"He gets pretty mathematical,'' said Alex, the oldest of Crick's four children.

Solving complex puzzles is a skill that most likely can be traced to his father, Francis Crick, one of the most notable figures in 20th century science.

His father, along with James Watson and Maurice Wilkins, won the 1962 Nobel Prize for medicine by solving another very complex puzzle: the double-helix structure of DNA molecules.

Crick left home in Northampton, England, in the early 1960s to follow in his father's footsteps. He entered Harvard Medical School's neurophysiology program for his doctorate.

Then his life took a twist.

Crick fell in with a group of computer programmers at MIT, dropped out of the neurophysiology program and got a job with a computer company.

"It is probably what my father would have done if he went through graduate school at the same time I did,'' Crick said.

"My interest was finding out what would be important in the future, and (because of that) I've always had a real knack to be where things are newest and fastest.''

His first job was with Massachusetts-based Bolt Beranek and Newman working on the precursor to the Internet. That's where Frogmaster was hatched.

In the early '70s, he wrote code for one of IBM's first operating systems and later solved computer glitches at The Boeing Co. In the 1980s, he helped develop Microsoft's Windows operating system.

Time for his own projects

Even though Crick continues to receive dozens of job offers for high-paying programming positions, he has always found himself branching out on his own to develop games.

"It's a very bumpy business, and most of the games you write you lose money on,'' he said.

His game company, Mica, still bumps along. "I have been lucky, particularly with WordZap, which has sold 1.1 million copies. There are not many other people who have managed to do that.''

WordZap, developed for the Microsoft Entertainment Pack in 1992, is a fast-paced word game similar to Boggle and Scrabble.

His latest venture is an online version of Word Zap, where players compete through Internet "game lobbies'' like ICQ, I-Games and Microsoft's Internet Gaming Zone.

"It is very addictive,'' said Crick, whose monthly tournaments find participants joining in from as far away as New Zealand and South Africa.

Even though WordZap is one of Crick's best-selling games, it is nowhere near his most profitable. That honor goes to an Olympics sports game called Go for the Gold, developed in 1986 for the old Commodore 64s.

Although it was a No. 1-selling game in England, the big payoff with Go for the Gold came years later. The United States Olympic Committee in 1994 paid -- handsomely -- for rights to the phrase.

Economics in the video game industry work in mysterious ways, Crick admits. "It is a very erratic and unpredictable business. Sometimes the money just appears when you are not expecting it.''

A FAMILY OF CRICK'S